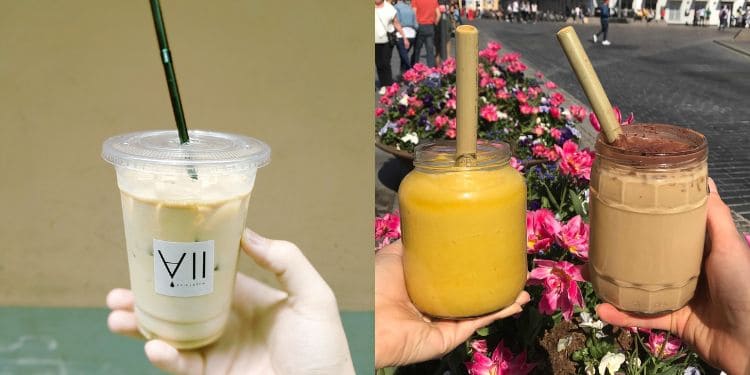 Which are the worst 10 things that pollute the Earth?

Millions and millions of plastic are produced yearly, and most of these items are dumped in landfills or oceans.

Every year, the International Coastal Cleanup creates a list of the 10 things that pollute the earth & our oceans the most.

Below, you will find the worst polluting items and explore easy swaps that are sustainable and better for the environment.

10 Things That Pollute The Earth & Our Oceans:

Tobacco products are the world’s largest volume (38%) of litter.

5.5 trillion cigarettes are consumed globally every year, most of which end up in our oceans.

Cigarette butts aren’t just litter; they are also responsible for the following:

So, smoking doesn’t damage only people’s health but also the planet and animals.

For more information, read my full article on how smoking affects the environment.

Nowadays, almost everything in supermarkets contains some plastic packaging.

What’s more, there is a rising concern about the possibility of releasing undesirable chemicals from plastic materials into food products.

Different substances are added to plastic items to increase the life of the plastics, which are not completely safe.

Usually, straws end up in landfills or oceans. When they end up in the ocean, straws have an enormous negative impact on marine life.

Probably you’ve seen how a simple straw can cause horrible things to marine animals. That’s why it is best to avoid single-use straws or stirrers altogether.

Plastic utensils and cutlery are having a massive impact on the planet.

Plastic forks and spoons require a lot of energy; during production, they emit carbon dioxide into the atmosphere.

Once CO2 it’s emitted, it is combined with other dangerous substances that create destructive climatic changes.

Around 40 BILLION plastic utensils are produced each year, and that’s just in the US.

India produces 129 billion utensils that end up in landfills.

The recycling rates are close to non-existing, so most of it ends up in our oceans and landfills.

Click here to see a visualization of the world’s addiction to plastic bottles.

Between 5 and 13 million tonnes of plastic finds its way into our oceans and is eaten by fish, sea birds, and other sea species.

According to research, the oceans will contain more plastic than fish by 2050, and the estimated decomposition rate for plastic bottles is 450 years.

One of the reasons why people buy water in plastic bottles is because they believe that the quality is higher and the water is cleaner.

The truth is that most bottled water is filtered tap water.

Furthermore, a bottled water bottle can contain microplastics, and if you tend to reuse the plastic bottle, it can grow bacteria. Yikes!

Let’s not forget the bottle caps. They are among the top 5 items found during beach clean-ups.

More than 20 million bottle caps and lids were found, over the last 30 years, during beach clean-up activities around the world.

Worldwide, we consume around 160,000 plastic bags, every second!

What’s worse, less than 1 percent are recycled. Plus, around 10% of this plastic waste goes to the oceans, which affects hundreds of species.

The materials needed to create this plastic item create a lot of pollution during manufacturing.

So, plastic bags don’t just harm the environment once we throw them away. They create damage along the whole production way.

It takes around 500 years to degrade in a landfill, but a plastic bag cannot break down or disappear completely.

Instead, they photo-degrade, meaning that they become microplastics that absorb toxins and continue to pollute the environment.

One example is the thin plastic bags used for fresh veggies and fruits.

But it doesn’t matter if we talk about thicker or thin plastic bags – they all have harmful environmental consequences.

Plastic bags require a lot of resources, and as we mentioned – they release toxins during their production and after their end of life.

Additionally, plastic bags cause pollution, and they are dangerous for wildlife.

Plastic lids include chemicals of serious concern in EVERY manufacturing step, and their environmental persistence is high.

They have a high potential to accumulate toxic chemicals in the environment, too. And they don’t have a recycling system.

Most coffee cup lids cannot be recycled, and because of the material they are made of, there is a possibility of leaching dangerous toxins into the coffee.

This can be takeaway containers, single-use styrofoam items, or cups from hard plastic.

Another material that involves chemicals is of serious concern in every manufacturing step.

When it’s in contact with heat, or any liquid substance, it leaches into the food/drink. Inhalation or ingestion can cause dizziness, headaches, vomiting, and unconsciousness in humans.

Hard plastic has environmental persistence and the potential to release toxic chemicals. And since such cups are not recyclable, they often end up in landfills and oceans.

It is simple – by avoiding the biggest plastic pollution items, we all can make a difference! It all depends on your mindset and how much you want to change.

While switching to more sustainable alternatives will take a little time, it is best to start making small and gradual changes.

With time you will see that the changes are so much easier than you think!

In your opinion, what are the worst everyday things that pollute the Earth the most? Share in the comments below.