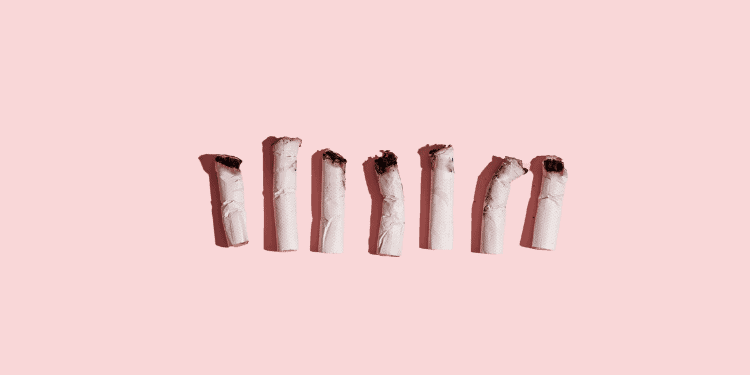 Smoking and cigarette butts are among the most common forms of plastic pollution on earth. Cigarettes can cause real, lasting damage not only to your health but also to our ecosystems.

But exactly how does smoking affect the environment?

Let’s take a closer look at each point and dive deeper into how smoking affects the environment and what we can do to prevent pollution from cigarettes.

Here’s How Smoking Affects The Environment:

They contain plastic called cellulose acetate, containing various chemicals. It can take up to 10 years to completely degrade.

More than six trillion cigarettes are produced annually, with cigarette butts contributing to 766 million kilograms of toxic trash each year.

Once cigarette butts enter the environment, the chemical leftovers seep into our soil, waterways, and air, so everything is affected by cigarette residue.

Cigarette litter gets broken down by sunlight and moisture, which release cadmium, lead, formaldehyde, arsenic, and other toxins into our natural systems.

This litter is ugly, and what’s worse, those toxins end up near people and wildlife.

Another downside is that tobacco agriculture creates more air pollution than we think.

You can see more about the life cycle of tobacco at the end of the article.

As mentioned in my recent post, cigarette butts are among the most common plastics in our ocean.

The harsh cigarette residue that leaks into our water sources also damages the aquatic ecosystem. Many chemicals are fatal to freshwater and marine fish species.

In combination with other pollutants and waste, cigarettes can further contribute to environmental damage by destroying coral reefs in the ocean.

Tobacco, the main ingredient in the manufacture of cigarettes, is mainly planted in rainforests areas.

Tobacco growing and curing are the two direct causes of deforestation. First, forests are cut for the tobacco plantations, and afterward, wood is burned to cure the tobacco leaves.

This results in a reduction in biodiversity, soil erosion, and displacement of animals from their habitats.

It ultimately helps to elevate the increasing global temperatures, leading to a massive imbalance in our planet’s ecosystem.

These are all resources that we can put to better use.

Make sure to check the life cycle of tobacco at the end of this article (infographic).

An additional environmental issue is using plastic sachets/pouches for tobacco or cigarettes.

This only creates more waste and more environmental problems due to human and ecological damage to plastic waste materials.

How does smoking affect human health?

Smoking is a massive health crisis around the globe. Millions of people live in poor health due to direct and secondhand smoking. We are particularly vulnerable to these three factors:

Yes, it’s doable to stop smoking, and many people I know have done so. However, it’s a tough habit to kick. Cigarettes contain nicotine, which triggers the release of feel-good chemicals in your body and changes the way your brain works.

Without nicotine, you end up going into withdrawal. Unfortunately, many people also connect their identity, emotions, and routine with smoking, so cigarettes become a crucial part of their lifestyle.

To quit, you would need to resolve the underlying factors that make you crave the nicotine in the first place.

Cigarette butts are not biodegradable because they contain plastic fibers called cellulose acetate.

Cellulose acetate takes very long to degrade, and it can’t organically break down from living organisms.

Depending on conditions, a typical cigarette butt can take anywhere from 18 months to 10 years to decompose. Unfortunately, during that time, it will persist, pollute, and release toxins into our environment.

How to prevent litter from cigarette butts?

A couple of individual things you can do include:

How do you properly dispose of cigarettes?

Always throw cigarette butts in the garbage and never on the ground. Make sure to put your smoke out before tossing it.

Is throwing a cigarette on the ground littering?

Yes, it is! Throwing cigarette butts on the ground releases plastic, heavy metals, nicotine, and other chemicals into our environment.

Additionally, cigarette buts are the most littered item, and it costs a lot of time, money, and resources to clean up cigarette waste.

Unfortunately, cigarette butt littering still persists, due to the lack of awareness and regulations.

The good news is that the number of people smoking is declining worldwide, but it is still essential to ensure that all cigarette butts are disposed of properly.

More critically, we should educate people on the environmental damaging effect and impact of smoking. By addressing this demand and spreading the information, we can cut down smoking-related emissions for good.

Do you have more ideas on how to prevent litter from cigarette butts? Feel free to share them below in the comments with everyone!

The life cycle of tobacco (Infographic):

Hi there! My name is Meri, and I'm behind Almost Zero Waste - a platform where you can find how to live sustainably, plastic-free alternatives, eco-friendly guides, tips, and more. For more information, check my about page!