Why Is Palm Oil Bad For The Environment? 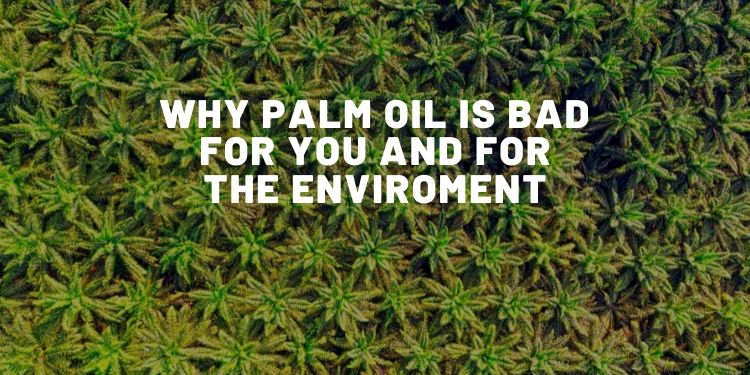 This means that is it not easy to find unbiased answers to the question “is palm oil bad?” because there are powerful interest groups involved in the story.

But let’s try answer to an important question, which is – why is palm oil bad for the environment?

Palm oil is bad for the environment, because:

We just scratched the surface. In this article, we will go through the following:

2. Why is palm oil bad for the environment?

3. Why don’t we just switch to another vegetable oil?

5. What foods have palm oil?

6. Bonus: Ways in which palm oil is good for you

Palm oil is the cheapest vegetable oil on earth because it is the most productive oil crop per hectare of farmed land.

This is the most crucial factor that causes all the effects of palm oil, for good and evil.

Some basic information on palm oil

Today, 85-90% of palm oil is produced in Indonesia (12 million hectares of plantations) and Malaysia.

But it originally came from western Africa, where it has been in use since times forgotten.

The scientific name of the African oil palm is Elaeis guineensis.

Each palm produces 14-20 fruit bunches every year, at the top of its trunk, each containing up to 3,000 palm fruits. When ripe, the fruits look little like orange-red olives.

For best quality, the fruits must be processed in a mill within 24 hours from harvest.

Why palm oil is so cheap?

How can this be possible?

The palm oil tree is a perennial. After three years, the plant begins to produce fruit.

For at least 20-25 years, its productivity is at the top level. Afterward, it drops, so trees are replaced.

Palm oil trees produce all year long. Every month a certain number of fruit bunches ripen and can be harvested.

Industrial plantations are enormous, at least 3000-5000 hectares. But they can be even several hundreds of thousands of hectares.

Plantations are so significant because this makes mechanization easier.

And this keeps costs very low. Machines have replaced a lot of manual work, so fewer workers are needed.

How palm oil is made?

Have a look at the traditional way palm oil has been produced in Nigerian villages for centuries in this video.

While in this “How to” short documentary, you can see how it is done in a high-tech and mechanized way. Can you spot the difference?

2. Why is palm oil bad for the environment?

Oil palms are tropical trees. They need to grow in the climate of the tropical rainforests to thrive and be so highly productive.

Modern intensive production in agriculture is based on monoculture.

The natural jungle is tоo “messy” for machines to work efficiently and to apply fertilizers and pesticides.

So, the rainforest has to go. To make room for the giant plantations that make palm oil so profitable.

In a nutshell, that’s the reason why the explosion of the palm oil business is a global threat.

Rainforests are the lung of the planet. More than 27 million hectares have been destroyed and turned into palm oil plantations.

Rainforest is also the keepers of the Earth’s biodiversity. In palm oil plantations, there are only palms. Biodiversity is lost.

Indonesia has large swamps under rainforests, rich in peat. When the forests are burnt, the swamps dry up, and peat can burn for a very long time.

This has caused catastrophic air pollution in Indonesia and its neighboring countries.

3. Why don’t we just switch to another vegetable oil?

A substitute for palm oil is not easy to find. At the moment, no product has the same very favorable characteristics for industrial production.

Palm oil has some specific technical aspects that make it a very versatile ingredient.

At room temperature, it is semi-solid. Great for all sorts of spreads and margarine.

Hydrogenated fats were used earlier to obtain the same effects. But they produce trans-fats that are very dangerous for health, so they were banned in the mid-1990s.

Palm oil was hailed as a very welcome substitute.

From pizza to toothpaste

Palm oil is great for bakery products, from cookies to pizza dough, and all sorts of packaged foodstuffs, because it gives texture and “mouthfeel.”

It’s a base for detergents. And cosmetics.

You eat it in your ice cream. You wash your hands with it – it’s in your soap. In your toothpaste.

You spread it on your lips because it’s in your lipstick too. And in your favorite sunscreen when you go to the beach.

“Palm oil is everywhere”, i.e., in 50% of all products that you can find in any modern shop.

Palm oil has also been introduced in recent years as biodiesel fuel. Although the European Union has now decided to phase it down and ban it altogether by 2030.

The reason is the terrible environmental impact of the giant plantations.

The short answer is: no.

Not even close. Not yet. Sustainability could still be achieved, perhaps, but it will take much more pressure from consumers.

In 2019, Science of The Total Environment published a recent analysis of the issue of sustainability.

The study, “Sustainable palm oil may not be so sustainable,” was carried out by researchers of Purdue University.

What is the real point of the “sustainability” certifications

Consumers are becoming increasingly aware of environmental issues. They want to buy products that do not harm the environment.

Convincing buyers that their products are environment-friendly is becoming a must for most businesses.

The most popular certification of “sustainability” for palm oil is issued by an international body called Round Table on Sustainable Palm Oil (RSPO).

Its members are oil palm growers, retailers, NGOs, and manufacturers.

RSPO is the child of one of the most powerful multinationals on planet Earth, the anglo-dutch Unilever. The company that earned palm oil its enormous success.

Unilever established the RSPO in 2004, in partnership with another world giant that loves to partner with rich multinationals, the World Wildlife Fund – WWF.

As the largest and most famous environmental organization in the world, the WWF is a powerful testimonial.

A well-known German investigative journalist, Wilfried Huismann, was not convinced.

The result was a 45-minute documentary called “The Silence of the Pandas – What the WWF Isn’t Saying”. It is visible on Dailymotion.

The book version, “PandaLeaks: The Dark Side of the WWF,” was banned in the UK until 2014. The WWF got furious and fought a legal battle against Huismann.

What was all the fuss about?

The RSPO certification, supported by the WWF, lists a series of obligations that producers of palm oil must respect.

Huisman’s movie and book want to prove that most of those standards are not respected.

Another large environmental organization, Greenpeace, attacked RSPO too, in September 2013.

‘RSPO standards are inadequate, poorly enforced, and offer palm oil consumers no guarantee that the oil they buy has been produced responsibly.’

In 2016 another smashing report was published, this time by the human rights organization Amnesty International.

“Companies are turning a blind eye to the exploitation of workers in their supply chain.

Despite promising customers that there will be no exploitation in their palm oil supply chains, big brands continue to profit from appalling abuses.”

5. What foods have palm oil?

If you are familiar with the destructive effects of palm oil production, you probably want to keep this ingredient off your table.

There are three ways to go if you want to make sure what foods have palm oil, e.i. to avoid consuming palm oil:

… because it has lots of derivatives. This means the ingredients of food products, but also components of detergents, cosmetics, etc.

Many of these ingredients and components have names that do not mention palm oil at all. Some organizations, like The Orangutang Alliance, keep a list of all the alternative names for palm oil.

The UK Intellectual Property Office approved the program in May 2018.

Austria, Spain, Sweden, and the USA followed, while approval in nine further countries was pending.

Giving up processed food as much as possible is better for your health.

In this way, palm oil is easier to avoid, since it is mostly an ingredient of processed food products.

So, buying fresh ingredients and preparing your own, healthy food is the best solution.

6. Bonus: Ways in which palm oil is good for you

Wait a minute… haven’t we said so far that palm oil is BAD?

There are two things for which palm oil is good:

In the countries of production, palm oil has improved the living conditions of countless families. So, is there some possible compromise?

A few fair trade projects are trying to find a way. The Serendipalm project was launched in 2009 in Ghana by Dr. Bronner’s, one of the top sellers of natural soaps in the US.

You can check them out on Amazon.

If you want to try a completely virgin palm oil soap from a smaller project, Juka Ceesay from Los Angeles has one:

Another fair trade organic red palm oil comes from Ecuador and is marketed by Nutiva. Cold filtered and unrefined, besides being sourced by small farmers committed to non-deforestation.

Red, unrefined palm oil is GOOD for you because it contains the highest amounts of vitamins A and E of any plant-based oil.

Red palm oil is considered the most abundant source of beta-carotene in nature. It can contain from 13 – 30 times more vitamin A-producing carotenes than carrots.

Remember the “Nutella scare” we mentioned earlier? It was caused by a study published by the European Food Security Agency (EFSA).

EFSA made it clear that the contaminants likely to cause cancer are not to be found in raw oils. They are produced when oils are refined at high temperatures.

Unrefined palm oil has a lively orange-red color, accompanied by a strong smell and carroty flavor. These features are the ones that refining wants to remove, to make palm oil “neutral” as the market wants it.

So, try it in its unrefined, healthy version.

Perhaps this could be the way of the future: small business, with some chances of becoming really sustainable.

Did we miss something important about palm oil? Feel free to share it in the comments below!

Why Should We Reduce The Use Of Plastic

Paola is a freelance journalist, focused on sustainable development projects since 2000. She does professional translation work, and she speaks five languages. You can learn more about her work on her website.

Hi there! My name is Meri and I'm behind Almost Zero Waste - a platform, where you can find how to live sustainably, where to find plastic-free goods, eco-friendly guides, and much more. To learn more, check my "About" page!